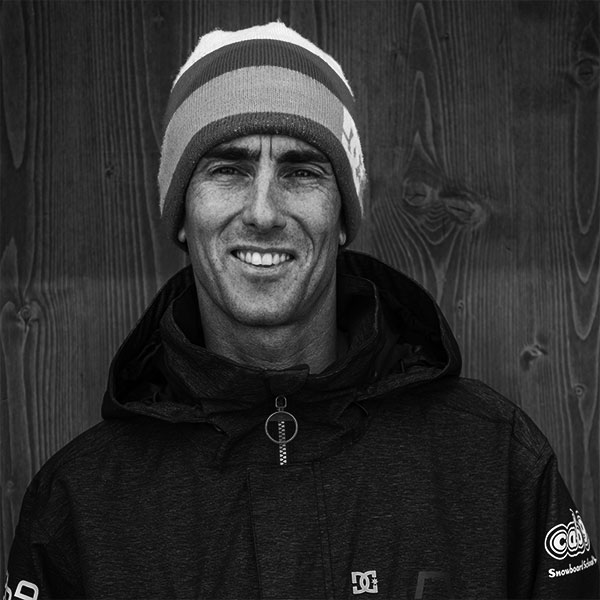 With over 20 winter seasons under his belt and having trained instructors for BASI for 10 years, Paul has a wealth of technical knowledge to pass on, as well as patience and teaching skills honed through countless hours coaching snowboarders from first-timers to the highest level riders.

Where are you from?
I’m originally from Hertfordshire but I’ve lived mostly in France, Spain and even Russia for a while.

How and when did you get into snowboarding?
I grew up around my parents’ watersports centre in Spain teaching watersports and spending my free time windsurfing and wakeboarding, so it was only natural for me to discover snowboarding back in the days when it was relatively unknown to the masses. My first winter in the mountains was back in the ’90s in Val d’Isere riding a Crazy Banana board and wearing a fluoro Nevica jacket. There were only a handful of snowboarders on the slopes and we were seen as rebels in those days!

After so many years riding what keeps you on the slopes?
Snowboarding has given me so much over the years: travel, friendships and good times. It’s taught me about myself and other people. The amazing thing is that there is always something new to learn, no matter how good you are. For me, it’s just as satisfying to help a beginner take his or her first steps as it is to train an instructor.

Snowboarding highlights?
Far too many special moments to mention but I particularly enjoyed representing the UK with the BASI Demo Team in South Korea in 2007

Favourite quote?
“The harder I practice, the luckier I get”

Our 16 yr old daughter wanted to start snow boarding this year and having had pervious positive experience of using CAB9 for another child, albeit some years ago, I emailed... read more and manage to book 2 lessons. Communication was easy and efficient. Lessons were brilliant and Jono was patient, kind and fun. It may be an expense, but honestly, it is cost effective as the tuition is soooo good. Thank you, we now have another proficient snow boarder in th

Had a great 3 hr lesson with Jono who very quickly picked up all my bad habits and started correcting them. The rest of my week was faster, smoother,... read more and required less effort. Would recommend whether you're just starting out or a seasoned boarder... there's always room for imp

Had a great 3 hr lesson with Jono who very quickly picked up all my bad habits and started correcting them. The rest of my week was faster, smoother,... read more and required less effort. Would recommend whether you're just starting out or a seasoned boarder... there's always room for improvement.

We had a week in Vals Thorens and had Marco as our instructor, we went for private lessons that me and my other half shared (he did three and I... read more had one lesson with Marco). Marco was amazing, very patient, supportive and had great knowledge. My partner was a complete beginner and came along so well thanks to the lessons. Booking was easy and Helen was really helpful in getting us the right deal / options for us! Th